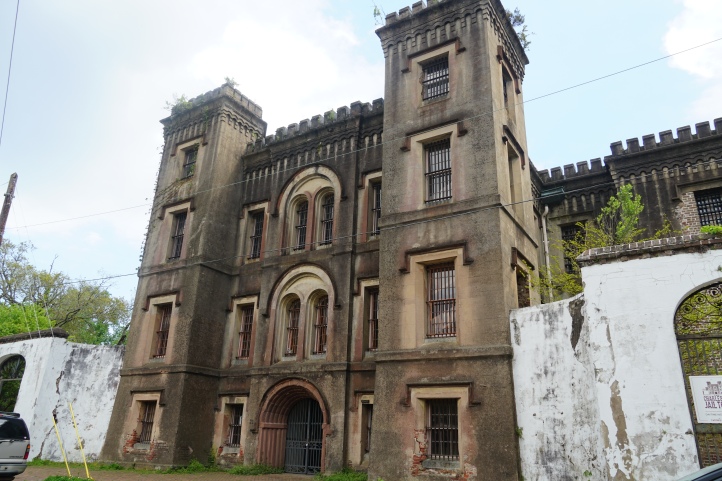 A few months ago was the first time I’d heard of the Old Charleston Jail.

Known as Charleston’s most haunted building, this creepy piece of historic real estate sits in the middle of a residential neighborhood. History tours are available during the day and ghost tours are available at night. Guess which one we’re planning to experience?! JP cannot wait! (You can click here for more detailed information).

In the meantime, here’s a little bit of history for you…

There is more than one legend surrounding the Nineteenth Century Bonnie & Clyde of Charleston. Lavinia and John Fisher owned the Six Mile Wayfarer House, at or around what is now the Naval Hospital in North Charleston.

I’m going to share what is the most probable scenario.

Upon arrival at the Wayfarer House, guests were offered a cup of tea. And by ‘cup of tea,’ I mean they were poisoned and stripped of their belongings. I would tell you that the couple swooped in, chopped up their bodies and buried them under the house, but I don’t want to freak you out.

The happy couple ended up being convicted of a series of small gang-related crimes that landed them in the Old Charleston Jail. Despite the mysterious disappearances surrounding visitors, authorities were unable to gather enough evidence to make a murder conviction stick.

Although she was arrested for unrelated crimes, Lavinia is reported to be the first female serial killer in the United States. I mean, everyone knows she killed the guests!

At that time, it was against the law to hang a married woman. To get around this law, the judge hanged John first, making Lavinia a widow. Before she was hanged, she begged for any man in the crowd to marry her. Yeah, right! When that didn’t work out, she screamed, “…if anyone has a message for Satan, tell me now because I’m about to see him!”

Charleston Jail is well worth plugging into your GPS the next time you are in the low country.