Do You Know the History of the South Carolina State Flag?

We, the people of South Carolina, are extremely proud to fly our state flag. But few native Sandlappers know that the white symbols on a blue background don’t constitute the original flag. Few have heard the term ‘Sandlappers,’ am I right?

Mom wrote that last paragraph and she was SO proud of it, I promised not to delete it. I am in the group of (young?) people who have never heard the term. I looked it up, though, and it’s an ACTUAL thing! We published this blog over on Charleston360, but I wanted to share it here too. I found the information so fascinating. I’ve lived in South Carolina my whole life and had never heard this… 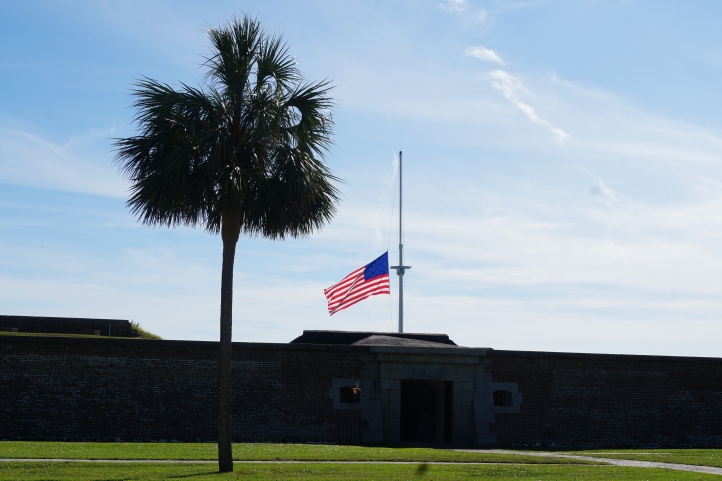 Colonel William Moultrie designed a flag to hang over Fort Sullivan (now Fort Moultrie) during the Revolutionary War. Moultrie’s flag had a blue background with a crescent and the words “Liberty or Death.” Soldiers’ uniforms were navy blue. The crescent shape was a gorget worn on soldiers’ collars or hats that signified their rank. Much confusion surrounds what most believe to be a gorget. Historians have even read diaries of Colonel Moultrie in hopes of proving his intent.  The symbol was only referred to as a crescent in the diaries. The gorget/moon controversy remains unsettled. 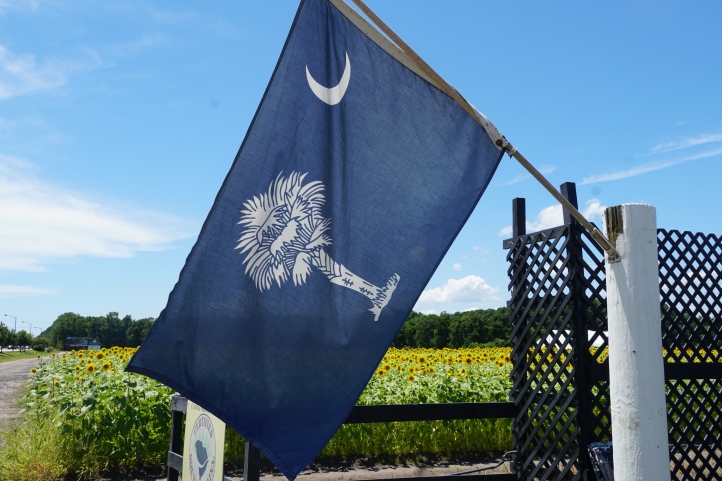 In 1861, state leaders used Moultrie’s flag as a basis for the design of the official state flag. The words were taken out and the palmetto tree added. The palmetto tree was significant in keeping the British cannonballs from penetrating the walls of Fort Sullivan. Walls of the Fort were fortified with palmetto logs that absorbed the force from the cannonballs rather than shattering. The Sabal palmetto was eventually designated the South Carolina State Tree.

State flags flying over South Carolina skies may differ a bit. Lawmakers never set official guidelines on the position, placement, size and color of the symbols. These details vary depending on the flag maker. Standardizing the state flag was discussed as recent as last year, but legislation failed to reach the Senate floor.

Personally, I prefer to think of the symbols as a moon over the palmetto tree. Regardless of how you look at it, knowing the history behind the symbols makes it even more meaningful.

South Carolina played a vital role in the founding of our country. Much of that past is chronicled in the streets of Charleston.

This has been such useful info to use with JP and Preston. Now, when we visit Fort Moultrie, they’ll understand the history behind the flag. And they’re learning it at nine and thirteen, as opposed to forty-two!