Charleston, South Carolina is often referred to as “The Holy City,” in part, due to its rich history of church buildings dating back to the early 1800s. One of these buildings is the Emanuel African Methodist Episcopal Church (AME) on Calhoun Street. The congregation was the first independent black denomination and one of the oldest African Methodist Episcopal churches in the entire United States. 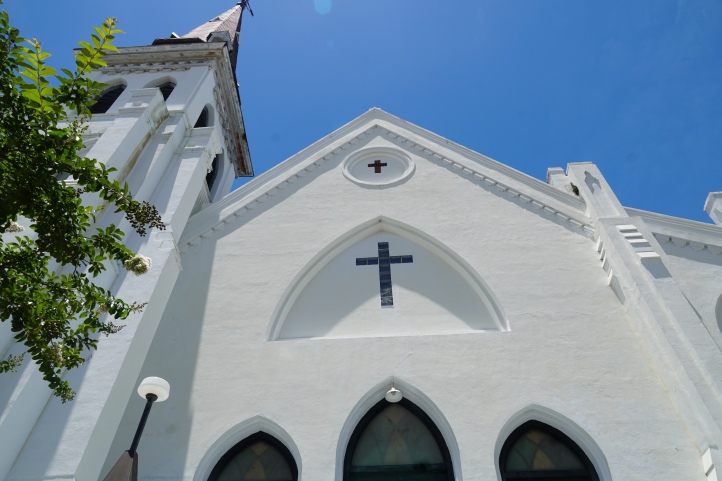 Emanuel AME was founded around 1818 as the Hampstead Church as a place for African-Americans to have a place of worship. City laws and discrimination common to the time limited how and where African-Americans could worship. The original church building was burned to the ground by a white mob in 1822, following the discovery of a planned slave uprising (the organizer of the uprising and thirty six co-conspirators were convicted in secret trials, housed in the Old Charleston Jail, and later hanged). A few years later, after laws banning all-African-American churches were passed, members of the congregation were forced to meet in secret, and illegally, up until the end of the Civil War, which ended in 1865.

The congregation built a church building in 1872, this time under the name the church now goes by: Emanuel African Methodist Episcopal Church. That church building was later damaged and destroyed during the 1886 Charleston Earthquake.

The current building was built in 1891-1892, during a proliferation of church building in the city. Although the Civil War ended slavery and allowed all-black churches, the church was built on the north side of Calhoun Street because blacks were not welcome on the south side of the street. The Gothic Revival style architecture was designed by Charleston architect John Henry Deveraux. The building has been remarkably preserved and contains a number of original features, including light fixtures, the communion rail, pews, and the alter. The bell tower with steeple, erected in 1903, and the pipe organ, installed in 1908 for only $800 (which was a lot of money at the time), are both still featured in the building.

A major renovation in 1951 updated and enhanced the church and gave the building its iconic white, stucco look. The renovations, incidentally, cost almost twice as much as the amount to build the original structure! Damage was caused by Hurricane Hugo in 1989, but this time the building stood strong (despite over $200,000 in damages). In 2018, the building was listed on the National Register of Historic Places.

What an amazing piece of history we have right in our backyard. To read more about the church and some of its deep history, visit the South Carolina Picture Project.

The church building and its congregation gained unfortunate national prominence on June 17, 2015 when an angry white supremacist (I won’t publish his name because he doesn’t deserve the attention) shot and killed nine parishioners at the end of a Wednesday night Bible study. Although these unspeakable events often bring on fear and terror, the congregation is best known for its ability to offer forgiveness, love, and compassion.

The term Emanuel (in its many different forms of spelling), means “God With Us,” which holds true given the history that the church and its people have endured through the centuries.